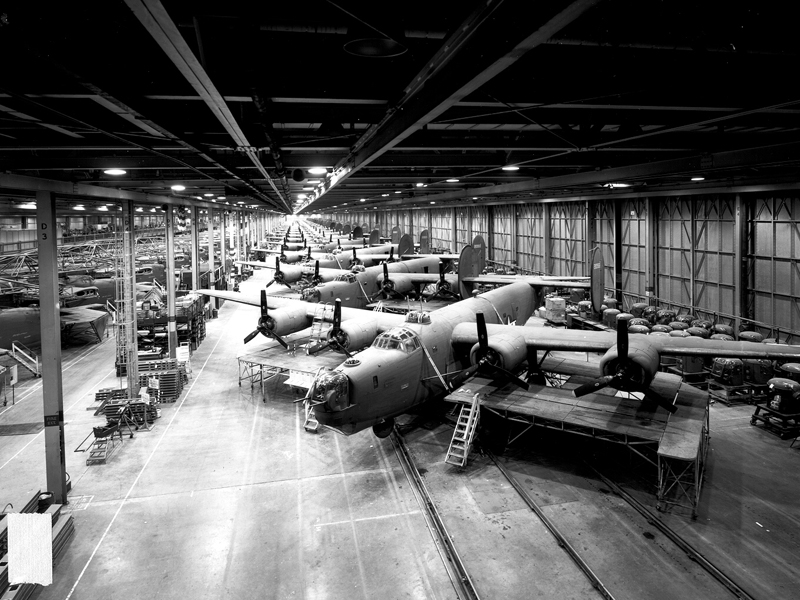 In 1939, the U.S. Army ranked thirty-ninth in the world, possessing a cavalry force of fifty thousand, horses to pull artillery, and had a smaller standing army than Sweden or Norway. Many Americans—still trying to recover from the decade-long ordeal of the Great Depression—were reluctant to participate in the conflict that was spreading throughout Europe and Asia. President Roosevelt did what he could to coax a reluctant nation to focus its economic might on military preparedness. If the American military wasn’t yet equal to the Germans or the Japanese, American workers could at least build ships and planes faster than the enemy could sink them or shoot them down. “Powerful enemies must be out-fought and out-produced,” President FDR told Congress and his countrymen less than a month after Pearl Harbor. “It is not enough to turn out just a few more planes, a few more tanks, a few more guns, a few more ships than can be turned out by our enemies. We must out-produce them overwhelmingly, so that there can be no question of our ability to provide a crushing superiority of equipment in any theatre of the world war.” 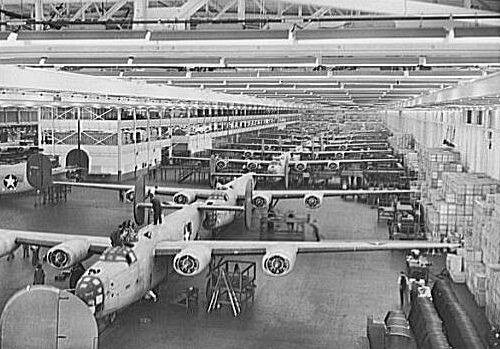 In the wake of Pearl Harbor, the president set staggering goals for the nation’s factories: 60,000 aircraft in 1942 and 125,000 in 1943; 120,000 tanks in the same time period and 55,000 antiaircraft guns. War production profoundly changed American industry. Companies already engaged in defense work expanded. Others, like the automobile industry, were transformed completely. In 1941, more than three million cars were manufactured in the U.S. Only 139 more were made during the entire war. Instead, Chrysler made fuselages. General Motors made airplane engines, guns, trucks and tanks. Packard made Rolls-Royce engines for the British air force. And at its vast Willow Run plant in Ypsilanti, Michigan, the Ford Motor Company performed something like a miracle 24-hours a day. The average Ford car had some 15,000 parts. The B-24 Liberator long-range bomber had 1,550,000. One came off the line every 55 minutes. America launched more vessels in 1941 than Japan did in the entire war. Shipyards turned out tonnage so fast that by the autumn of 1943 all Allied shipping sunk since 1939 had been replaced. In 1944 alone, the United States built more planes than the Japanese did from 1939 to 1945. By the end of the war, more than half of all industrial production in the world would take place in the United States. While 16 million men and women marched to war, 24 million more moved in search of defense jobs, often for more pay than they previously had ever earned. Eight million women stepped into the work force and ethnic groups such as African Americans and Latinos found job opportunities as never before. (PBS, 2007)