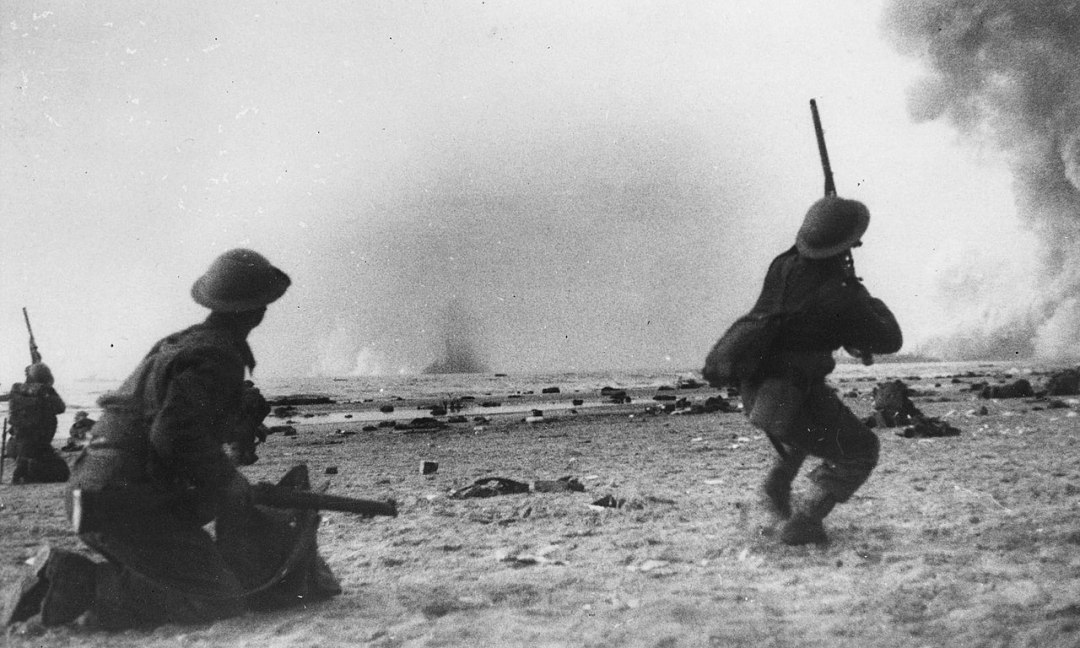 Standing on the white cliffs of Dover on a (albeit rare) clear day, you can see the shores of France. Dunkirk is a mere 78 miles away, directly across the English Channel from Dover. What happened at Dunkirk is called a miracle for good reason. Not only was it a stunning rescue effort by thousands of civilian sailors and fishermen, but the weather itself changed to be in their favor. This unusual change helped to stop the German advance, protect the troops on the beaches from air attack, and facilitated embarkation by boats.

Dunkirk and the surrounding area does have both fair and stormy weather. Fast east moving wave cyclones often bring storms, but air masses from the Azores can linger over the area and divert storms creating conditions of lingering fair weather. The odds of fair weather begin to decrease in the spring from a high of 40% in April to 30% chance in late May, and is even less common during early June. It was in late May, when the odds were poor for fair weather, that the British Expeditionary Forces (BEF) found themselves cornered on a beach, surrounded by the encroaching German army, by land, by air, and by sea. All seemed hopeless.

On 23 May, German tanks were only 10 miles from Dunkirk when they stopped for three days. A halt that has yet to be fully explained although the most popular theory involves a battle between Hitler’s generals and Hitler on who really was in charge. The terrain and weather may also have influenced or decided the question for the Germans. On May 26-27 a large cyclone moved over the Flanders saturating the areas and rendering the flat and swampy area even more unfavorable for tanks. There is more evidence that Hitler himself was greatly influenced by his memories of marshy Flanders in World War I and thus became needlessly fearful of his tanks becoming bogged if they drove any farther north. Some of his generals who talked with him, however, felt that his halt order was also the result of a belief that Great Britain would be more willing to make peace if its pride was not wounded by seeing its army surrender. Adolf Hitler, under advisement from Luftwaffe commander Hermann Goring, decided to remove the tanks and finish the Allied forces through air attacks. However by May 28th, an Atlantic storm, which had hampered embarkation of the Allies in the harbor, had shifted course and the lingering effects of the storm created a low ceiling which greatly hampered German air attacks through May 30.

On May 26, the British began to implement Operation Dynamo—the evacuation of Allied forces from Dunkirk. As there were not enough ships to transport the huge masses of men stranded near the beaches, the British Admiralty called on all British citizens in possession of any seaworthy vessels to lend their ships to the effort. Hundreds of fishing boats, pleasure yachts, lifeboats, ferries and other civilian ships of every size and type raced to Dunkirk, braving mines, bombs, torpedoes and the ruthless airborne attacks of the German Luftwaffe. During the Dunkirk evacuation, the Royal Air Force (RAF) successfully resisted the Luftwaffe, saving the operation from failure. Still, the German fighters bombarded the beach, destroyed numerous vessels and pursued ships within a few miles of the English coast. The harbor at Dunkirk was bombed out of use, and smaller civilian vessels had to ferry the soldiers from the beaches to the warships waiting at sea. But for nine days, the evacuation continued—a miracle to the Allied commanders and the rank-and-file soldiers who had expected utter annihilation. Although beach evacuation was difficult due to the lingering effects of the storm, the channel began to calm with low surf and an intermittent breeze that carried streams of smoke from the burning port over the beaches providing further concealment. When the skies did clear at times, the German air force was able to launch devastating attacks on the harbor. By June 4, when the Germans closed in and the operation came to an end, more than 338,000 soldiers were saved. In the days following the successful evacuation, the campaign became known as the “Miracle of Dunkirk.”

“I have, myself, full confidence that if all do their duty, if nothing is neglected, and if the best arrangements are made, as they are being made, we shall prove ourselves once again able to defend our island home, to ride out the storm of war, and to outlive the menace of tyranny, if necessary for years, if necessary alone. At any rate, that is what we are going to try to do. That is the resolve of His Majesty’s Government — every man of them. That is the will of Parliament and the nation. The British Empire and the French Republic, linked together in their cause and in their need, will defend to the death their native soil, aiding each other like good comrades to the utmost of their strength. Even though large tracts of Europe and many old and famous states have fallen or may fall into the grip of the Gestapo and all the odious apparatus of Nazi rule, we shall not flag or fail. We shall go on to the end, we shall fight in France, we shall fight on the seas and oceans, we shall fight with growing confidence and growing strength in the air, we shall defend our island, whatever the cost may be, we shall fight on the beaches, we shall fight on the landing grounds, we shall fight in the fields and in the streets, we shall fight in the hills; we shall never surrender, and even if, which I do not for a moment believe, this island or a large part of it were subjugated and starving, then our Empire beyond the seas, armed and guarded by the British fleet, would carry on the struggle, until, in God’s good time, the New World, with all its power and might, steps forth to the rescue and the liberation of the old.”